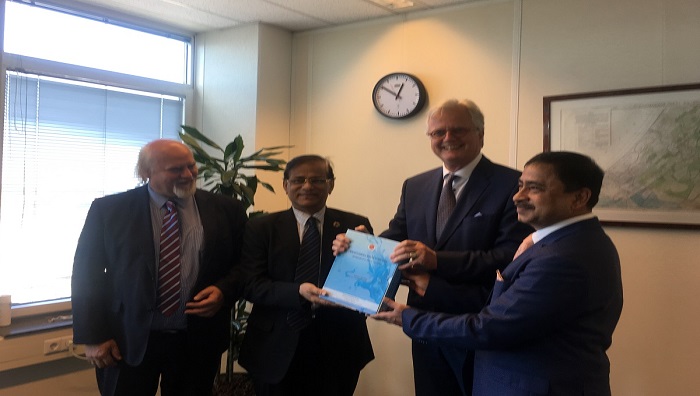 The Netherlands has reassured Bangladesh of extending its support for implementing the Bangladesh Delta Plan 2100.

Director-General International Cooperation of the Dutch Minister of Foreign Affairs Reina Buijs expressed Dutch government’s readiness in this regard to the visiting high-level delegation from Bangladesh to the Netherlands led by Dr Shamsul Alam, Member GED (Senior Secretary), Planning Commission during a meeting at the Ministry of Foreign Affairs in The Hague on Monday.

The Dutch Director-General also reassured Bangladesh of continuing  technical cooperation as well as encouraging Dutch private sector’s engagements in the effective implementation of the Delta Plan, particularly in the areas of land reclamation, river dredging, flood defence, and capacity development.Bangladesh Ambassador to the Netherlands Sheikh Mohammed Belal referred to Prime Minister Sheikh Hasina’s invitation to the Dutch Prime Minister to visit Bangladesh for the ceremonial launching of the Bangladesh Delta Plan 2100.

He said an official visit by the Dutch Prime Minister accompanied by a water and delta management related business delegation would usher in a new beginning in bilateral cooperation between the two countries, according to the Bangladesh Embassy in the Hague.

The Ambassador also sought Dutch support under the broader framework of the Delta Plan for mitigating long-term flood risks and the adverse impacts of climate change through basin-wide water management.

The Dutch Director General hoped that a visit by the Dutch Prime Minister to Bangladesh accompanied by a business delegation would result in tangible cooperation between the two countries in implementing the Delta Plan.

Earlier in the day, the delegation held a meeting with the Dutch Delta Commissioner Peter Glas at his office.

Bangladesh Delta Plan 2100: Not the most practical proposal

Photo: www.bangladeshdeltaplan2100.org Md. Khalequzzaman Bangladesh is considered to be ex…

There are no upcoming events at this time.